Pope Francis, born Jorge Bergoglio in Argentina is considered a very modern and progressive pope, as well as a more humble and approachable pope than those of the past. Francis is a pope of firsts, first Jesuit pope, first from the Americas and first from South America. Pope Francis has made fighting poverty one of his chief causes.

While maintaining traditional Catholic stances opposing contraception, abortion and homosexuality Francis’s greatest principal is that of Jesus’s teachings of mercy. Therefore, though he condemns certain practices as immoral he does not condemn the practitioners themselves, believing all beings to be deserving of love and compassion. Francis has also championed open dialogue with and acceptance of other faiths including Judaism, Islam,Protestantism, Atheism and has worked to mend the over 1000 year rift with Orthodox Christianity.

In an unusual precedent of diplomacy US President Barack Obama enlisted Pope Francis to aide in reopening relations with Cuba which he successfully shepherded to completion. Only two years into his papacy Pope Francis continues to surprise including his acknowledgement of and concern regarding climate change. His historic visit to the United States in September 2015 is sure to include new revelations on not just his stances but his whole manner and approach to interacting with all beings, not only Catholics.

This week a deadly derailment occurred, in Philadelphia, as a speeding train jumped the tracks while making a very tight turn.

It brings to mind another deadly Philadelphia derailment, about a mile from the most-recent disaster, which occurred on Labor Day in 1943.

It also prompts a question:  What is America’s deadliest train wreck? It happened during World War I, near Nashville. Within about three days, however, the story was essentially “out of the news.”

Why did the press move-on, so quickly, to cover other things? You will be surprised, and saddened, by the most-likely answer. 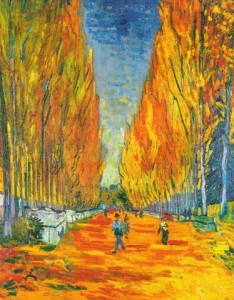 Vincent van Gogh felt he was a failure in his lifetime, borrowing money for food and paints from his brother Theo.  If only Vincent could know that his painting of the Alyscamps cemetery in France sold May 5, 2015 for $66.3 million!

Read our StoryBrief about his trip to the cemetery with Paul Gaugin and how one artist influenced the other to paint beyond what was immediately seen.

And our multi-chapter Vincent van Gogh Story provides yet more insight into the life of this artist who changed how we all see things.